Mark Crimmins – The Future is Now

You are here: Home1 / Issues2 / Mark Crimmins – The Future is Now

Mark Crimmins
The Future is Now

In 2019, a student in one of my business classes in China walked to the front of the classroom. He pulled from his pocket a hundred yuan bill, held it up, and told a story. ‘When I left my village in Anhui Province to come to university in 2017, my grandma gave me this bill. “Here is a hundred yuan,” she said, “buy yourself a present from your old granny!” I put the bill in my wallet and brought it to university. Two years later, as you can see, I still have the money in my wallet. I have not used any paper money since I left home. It will probably still be in my wallet when I graduate in 2021. My grandma is very kind, but she is old fashioned. She doesn’t realize that paper money is a thing of the past.’
Early in 2020, When I went to a local supermarket and pulled money from my wallet to pay for my groceries, the old ladies behind me in line let out a collective sigh of exasperation. ‘It’s the foreigners,’ I heard one of them say in Mandarin—‘They still use paper money!’ Then I read a China Daily story about a robbery in Guangzhou. The thieves held up a convenience store and escaped with: seven dollars’ worth of cash! All the store had. When I got AliPay recently and started purchasing things by scanning QR codes with my phone, I stopped using paper money altogether. The transition was instantaneous. Now, when I ride the subway, take a cab, eat a meal, go shopping, use a vending machine, pay my bills—even when I buy a fifty-cent popsicle, I scan the payment with my phone.
Back in the classroom, I had an argument with a student from Guangzhou. She was talking about how nice it is to be so close to home as a student in Shenzhen. ‘On the high speed train I can be home in thirty minutes!’ she said. ‘No,’ I replied. ‘Not true!’ The Guangzhou young woman felt sure she was right. At 320 kilometres an hour, she had whooshed from Shenzhen to Guangzhou and back dozens of times. But so had I. ‘It never takes thirty minutes,’ I told her with a cheeky smile. The other students laughed nervously. ‘That train ride only takes twenty-nine minutes! In my fifty-nine rides between the two cities, it has only varied from twenty-nine minutes once, and that was when the train arrived at Shenzhen North Station twenty-eight minutes and fifty five seconds after departing Guangzhou South Station. That must have been a fast driver!’

Every day, I walk to the university where I teach through the Dayun Nature Park. It’s a forty-five minute stroll o’er hill and dale of beautifully landscaped yet also wild greenery, part of a mammoth environmental initiative in my home province: the Guangdong Greenway project. In 2017, on one of my first walks to class by this route, I heard a buzzing over my head and turned. Skimming my hair and landing smoothly on the asphalt path ahead of me was a drone shaped like a baby Concord. I never saw its owner. Maybe it didn’t have one.
A few months later, I saw a hawk soar up from a park woodland. With some excitement, I pointed it out to my girlfriend. ‘Nope,’ she quipped. ‘That’s not a hawk—it’s a drone, silly!’ And so it was.       Walking home through the park after classes ended in May 2021, I saw something new. Patiently and smoothly climbing the incline before me was a robot. A machine four feet high, it was cleaning, with great precision, the side of the asphalt path, which is two miles long and curves around the contours of hills, rising and falling as it does. Following the robot was an old man carrying a transistor radio from which a Tibetan singer belted out a song about the Qinghai Plateau. The old man watched the robot ahead of him as it uniformly climbed the hill, swishing its brushes and leaving a smart, clean, wet stripe two miles long in the gutter behind it. The old man and I looked at each other, looked at the robot, laughed, and shook our heads. 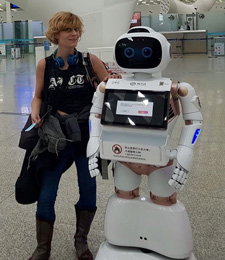 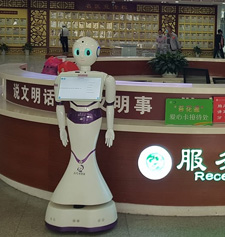 That was the most recent robot I’ve encountered in the city of Shenzhen, where I have lived since 2016. The first time I remember seeing a robot at work was in 2017, when I went to Shenzhen’s Bao’An International Airport, a stunning edifice shaped like a gigantic manta ray. In the arrivals area, next to the Information desk, stood the welcoming robot with its winsome face, fetching eyelashes painted above the light emitting diodes of its eyes. I went off to check my luggage, surprised to find a human worker handing out boarding passes.
Before returning home to Hong Kong in May 2021, I had to go to the nearest local hospital, The Beijing Traditional Chinese Medicine University Shenzhen Hospital, for a Covid test. It was no surprise for me to be greeted at the hospital entrance by a robot, whose job was to assist the Information desk staff. When I was in Shenzhen government-mandated quarantine for arrivals from Hong Kong back in January 2021, I was allowed to open my hotel room door to pick up my meals, and as I did, I would often see a cleaner robot puttering along the carpeted hall doing its hoovering and sweeping. It seemed to do a bang up job of cleaning the hallways and keeping the carpets clean.

Not long ago, I was waiting at a bus stop. One of the city’s thousands of electric buses (Shenzhen has no other kind) was gliding past me along Longxiang Boulevard. Next to the driver, I saw a robot at the front of the bus. I figured the robot gave passengers advice about upcoming stops or nearby places of interest. But then another thought occurred to me: perhaps the robot itself was a passenger like everyone else, on its way from one job to another.

At the end of 2018, I was walking along the broad sidewalk next to a local mall when I stopped in my tracks. Rolling smoothly towards me was a policeman like no other I’d ever seen: a robot wearing a smart metal policeman’s dark blue uniform, the insignia of the Longgang District Police on its cap. As the robot moved gently forwards through the crowds of shoppers, a gob-smacked child fell off her bike in front of the machine. The robot rolled to a halt. I heard a beep. A whir. Then the robot rotated forty-five degrees and cut a diagonal around the fallen child, who continued to watch it, mesmerized, with open-mouthed delight. Next, the robot cut another forty-five degree angle and regained its original course behind the child, continuing up the sidewalk until it stopped briefly in order to accommodate the pedestrian trajectory of a mother pushing a stroller.

Two years ago I attended a museum exhibition celebrating forty years of municipal development since Deng Xiaoping declared Shenzhen a Special Economic Zone and made the city a vast pilot project to experiment with the rapid transformation of Chinese cities. In those four decades, Shenzhen morphed from a fishing village with a few hundred inhabitants into a gleaming megalopolis of twenty million residents, now one of the richest, greenest, and most beautiful megacities in China. The stunning deconstructive architecture of the museum belied the low-tech contents of some exhibits: photographs of huge factory floors, legions of sewers at their machines, construction workers topping out ever-higher skyscrapers. The city’s transition from manufacturing facilities to white collar work environments was charted carefully, each economic phase of development passing with dizzying speed. As I reached the final gallery, I heard squawks and screams of childish delight. I rounded a corner to see four young children dancing like there was no tomorrow, gyrating their little bodies and giggling madly. An electronic break beat blasted from the exhibit speakers. I approached the dancing children and passed between their laughing parents. There, in front of the delighted kids, were two child-sized dancing robots, hopping from foot to foot and waving their arms in time to the music. Side to side, up and down, the machines had it—rhythm. It was a case of Saturday Afternoon Fever—micromoving kindergarteners hooked on robotics.
In a way, I could see all of this coming. Four years ago, I took a short staycation in the Huaqiang North District of downtown Shenzhen, forty kilometers away from my own home in the vast metropolis. The Huaqiang District includes China Electronics First Street, which was already becoming famous.

I stayed up on the thirty-fifth floor of The Huaqiang Plaza Hotel, a glittering skyscraper of steel and glass, though a small one by Shenzhen skyscraper standards. I was riding upwards to my room in the glass elevator one day, looking outwards at the astonishing cityscape. The elevator slowed and stopped. The doors opened. A robot soundlessly entered the elevator and turned around to face the doors. Its robotic arm held a folded China Daily. The robot was able to select its floor remotely. Four floors later, the elevator stopped again and the robot rolled soundlessly through the doors, turning left. I held the elevator doors open and peered along the curved, carpeted hallway. The robot stopped before a guest suite and rotated to face the door. A few lights flashed in its head. The doorbell to the room rang, remotely selected like the elevator button. The robot’s arm lifted the folded newspaper in preparation to deliver it to the guest, who opened the door, laughed, and took the newspaper, uttering a ‘xie xie‘—thank you—in surprise. ‘Bu yong xie‘, a woman’s electronic voice replied from somewhere inside the robot: ‘No thanks necessary’.
The next time I stayed at the hotel, I made sure I called the front desk to ask for a newspaper to be delivered to my room. When I heard the doorbell ring, I knew what to expect. AQ