The witch craze that tore through Europe and the Americas, peaking in the late 17th century, resulted in fanatical accusations, bogus trials, torture, and executions—by fire, strangling, boiling alive, or hanging—of over 100,000 people, most of them women. Typical charges against them were souring milk; damaging crops; cursing at or hurting children; causing miscarriages; and inflicting death or illness on animals or humans. After being tortured, the accused often confessed to having entered a pact with Satan, engaged in intercourse with him, or suckled demons. The hysteria and persecution of witches lingered into the 20th century, especially in the countryside, where an irrational belief in witches persisted despite advances of science. Those thought to be witches were often suspected to be part of a 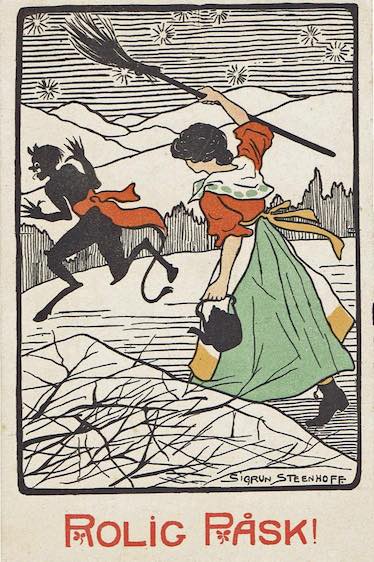 In Sweden, a belief emerged that witches came out at the most sacred time of year, on Maundy Thursday—the day before Good Friday—and flew to Blåkulla (the equivalent of Brocken in German legends) to consort with Satan until Easter Sunday morning. Blåkulla is a sort of backwards world: witches sit with their backs to the table; women assume roles normally ascribed to men; men assume roles typically performed by women; and the old and haggard become young. Before departing via chimney or keyhole, Easter witches (påskkäringar) poured oil from horns obtained from Satan and rubbed it on the brooms, poles, cattle, or even sleeping humans, fish, bicycles, balloons, eggs, or barrels they would ride to Blåkulla for Black Sabbath.
Mirroring this belief in witches and Blåkulla, Swedes in their teens and twenties began dressing up as påskkäringar to terrorize local villagers on Maundy Thursday and Holy Saturday. It is believed this tradition began in the late 1700s. By the mid-1800s, the tradition was widespread. It persisted throughout the 19th and into the 20th century, especially in western Sweden. 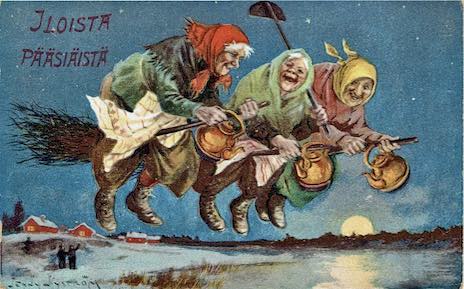 Young adults made themselves look as hideous as possible and emitted otherworldly shrieks and howls, often imitating cats serenading. Occasionally, they overturned cart or wagons or poured water over horses to give the impression witches had ridden them hard. More likely, they threw anonymous Easter letters inside outer doors, often accompanied by a log, to invite recipients to join in the Black Sabbath. The letters consisted of verse and symbols associated with påskkäringar. Sometimes, the texts and symbols were frighteningly personal. After leaving a letter, the marauders brushed their brooms by the windows. As they ran, they swung their brooms to make them whistle, mimicking the sound of witches in flight. Because many people actively believed in påskkäringar and Blåkulla, they were vulnerable to being terrorized by the young marauders. And they dared not complain, else they risked even worse treatment by the påskkäringar the following year. 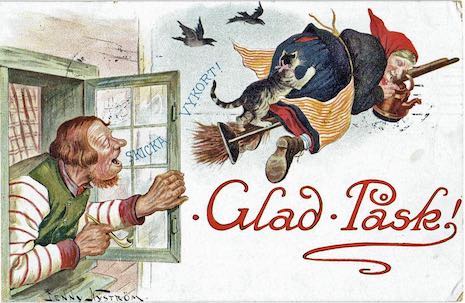 To take on the appearance of påskkäringar, young men and women dressed up in grungy old clothes, often turned inside out, or even in fur or hides. Men often disguised themselves as women; and women, as men, thus anticipating the gender reversals in Blåkulla. It’s noteworthy that, those who took on the appearance of women were called witches, but those who presented as men were called trolls. Many wore hideous-looking masks or darkened their faces with soot to maintain anonymity. They often carried brooms, rakes, poles, other garden implements, coffee pots, and ointment horns. Carrying the tools needed to fly at a moment’s notice, they ran about leaving Easter letters despite seeing tar crosses meant to fend of witches, fully anticipating their actions might influence Sunday’s Easter sermon about påskkäringar and Blåkulla. As they tore through a village, there was usually no notion of ‘trick or treating’ but occasionally the witches and trolls stopped and asked for drink, usually Schnapps, or it was freely offered. 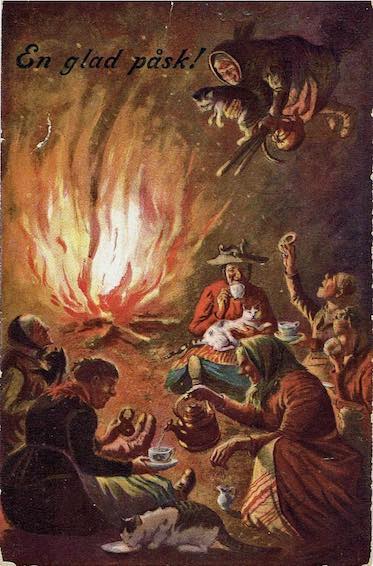 In the late 1890s, picture postcards came into being, and påskkäringar became a fanciful subject for Easter (Pask) cards. The vast majority of Easter witches shown on early postcards present as women. Only rarely do the witches come across as men masquerading as women. Typically, they ride on brooms and carry coffee pots and are accompanied by cats. Some are seen bursting out of chimneys or crashing down them on arrival home. Many are seen in flight to Blåkulla or having arrived and meeting with a coven of witches. Now and then they carry ointment horns or take alternative transportation: cattle, bicycle, air balloon, even car. 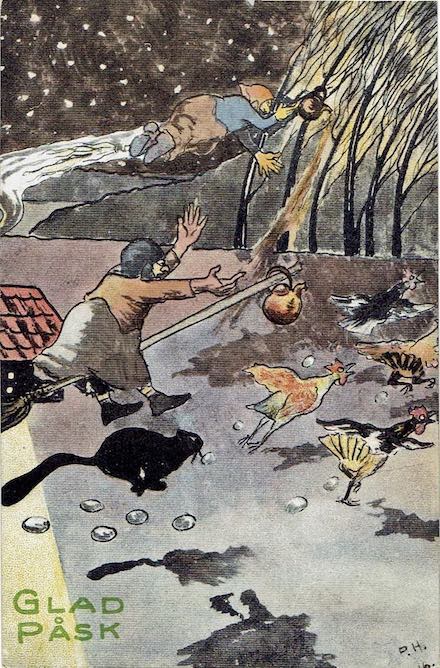 Early postcards were designed during a period when belief in påskkäringar as real witches (haxa) was dying out, but still persisted in parts of Sweden, especially among the elderly. Some postcard images must have been terrifying to someone who still entertained the possibility that påskkäringar could be real witches. Considering the reference time period is 100 to 120 years ago, it is highly likely that most children still believed påskkäringar were real witches. These postcards kept the legend of påskkäringar and Blåkulla alive. Even those who knew there couldn’t possibly be Easter witches were reminded that a tradition of masquerading as witches and terrorizing villagers had long existed. 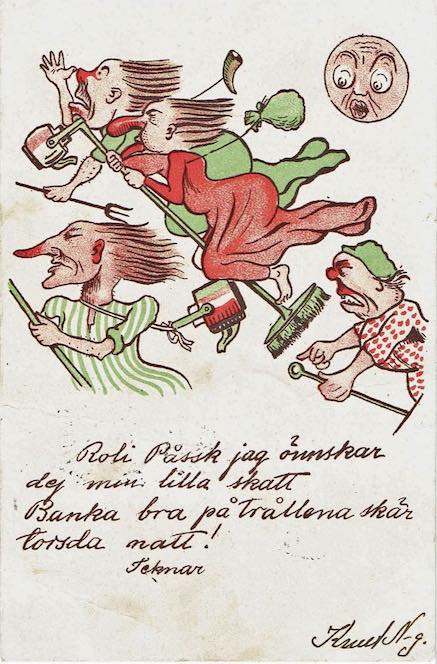 The early påskkäringar cards that most fascinate me are the ones that show how men responded as their påskkäringar women prepared to journey. Some show men sharing a broom or taking off on their own. Others show variations in supportiveness: on the ground, pulling or dragging the women back vs. helpfully seeing them off; or, through a window, looking shocked, kissing them goodbye, or standing in awe. 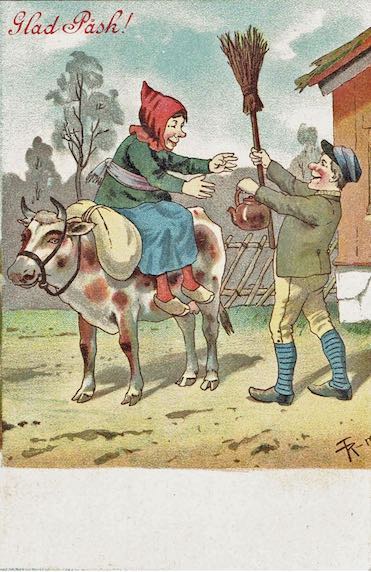 Just as the 20th century yanked fearful characters from Grimm’s fairy tales through a process akin to Disneyfication, it also transformed Easter Witches. Now, twenty-somethings no longer masquerade as witches to terrorize villagers. Instead, children, mostly girls, put on cutely bewitching, garish outfits and painted-on freckles, and go singing door-to-door and politely asking for candy. Easter witch postcards from the mid-20th century document this domestication of the Easter witch. Some cards even suggest that the legends associated with Easter witches were veiled stories of women’s liberation and a variation on ‘sisterhood is powerful’. 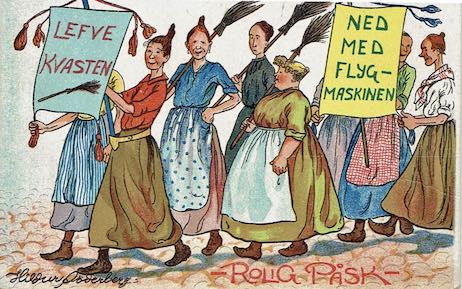