In 2021, Amsterdam Quarterly was scheduled to celebrate three 10th anniversaries. However, due to Covid-19 pandemic restrictions, two of these three anniversaries could not be celebrated.

The first anniversary would have been in January 2021 and marked the 10th Amsterdam Quarterly yearbook launch party and reading at the American Book Center in Amsterdam. AQ would have celebrated this event on 29 January 2021 with writers published in AQ in the past year, members of the Amsterdam Quarterly writers’ group, and an enthusiastic audience. The AQ 2020 Yearbook features work in in eight genres: art, essay, fiction, memoir, news, photography, poetry, and reviews. However due to lockdown restrictions, no physical event could be held, and the 2021 yearbooks were posted to 63 contributors in 12 countries in five continents with the assistance of Maria and Steven at the ABC. 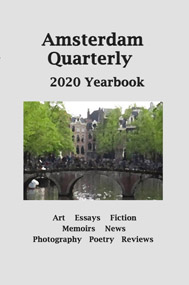 The second anniversary was the 10th anniversary of the amsterdamquarterly.nl website, which would have taken place sometime in May 2021. amsterdamquarterly.nl is AQ’s original website and URL, which has served AQ well for the last decade. It would have also marked the date of Amsterdam novelist’s Philibert Schogt’s first interview with AQ in 2011.

The last anniversary, which hopefully will be celebrated in person, is the 10th anniversary of the AQ Writers’ Group, which has run continuously since October 2011. During this time, the writers’ group has met at three locations, the last of which being the Amsterdam Stadsschouwburg Café and Brasserie. Here the group met every third Sunday (July and August excepted), to discuss each other’s work and to take in a bit of Amsterdam’s rich artistic scene. However, since March 2020, the AQ Writers’ Group has met virtually. AQ publisher/editor Bryan R. Monte, the group’s leader, hopes the group can soon return to meeting physically after this summer so that ‘we can finally celebrate at least one of AQ’s three 10th anniversaries in 2021.’