Rink Foto has been covering San Francisco for approximately 50 years. He took this photo of a darkened, red-orange sky above the Castro Theatre in the city’s Castro District at 11 a.m. on 9 September 2020. The darkened sky and obscured sun, just visible in the photo’s upper-right corner, were the result of wildfires in Northern California and Oregon, which are seen as indicators of climate change. (Notice also the cars driving with their headlamps on for extra visibility and the theatre marquee that reads: ‘Stay Healthy and Safe. We’ll Be Back Soon’). One such city was Tylissos, not far from the palace of Knossos, where Odysseus found shelter when he was blown ashore by a fierce storm on his way to Troy. 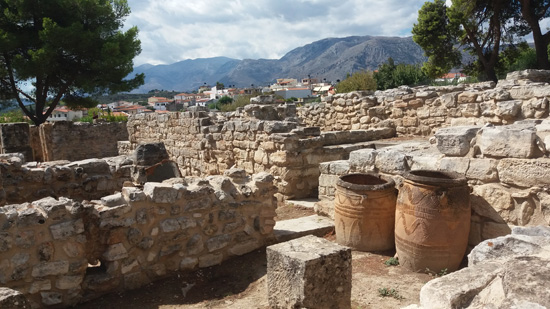 But the place in Crete that has drawn me back repeatedly is Ancient Eleftherna, site of one of the island’s most important ancient city-states. It lies on the slopes of Mount Ida, the birthplace of Zeus, amongst swathes of olive trees, carobs and oaks, its high ridge looking over the distant sea.
Here excavation is still on-going. Recent finds include a tomb housing the cremated remains of warriors from Homeric times, brimming with opulent grave gifts of jewellery and weapons. And a cremation site with funerary pyres, which conform in every detail to Homer’s description of the pyre built for Patroclus in the Iliad. The archaeologists plan to eventually return the warrior’s remains to their place of rest in the sheltered valley where they had lain in peace for so many centuries. 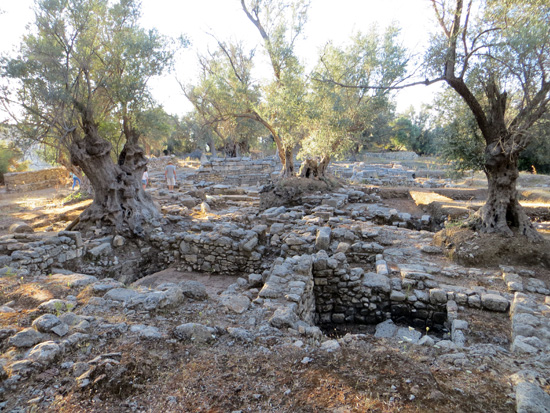 Roman Temple, Nimes, France
When the Romans forced their way into France the people of Nimes chose to co-operate with rather than challenge the invaders. In consequence the city retains many features from that time, notably this Roman Temple, which is one of the best preserved of its kind. Pont du Gard, southern France
The Romans were brilliant engineers as evidenced by this huge aqueduct built in the 1st C. CE. It spans the River Gardon and looks good to last well into the future. Norwich Cathedral, UK
Founded soon after the Norman conquest of England. The cathedral spire, one of tallest in Britain, is seen here through an archway in the cloisters. It provides a nesting site for peregrine falcons. Among the many notable features of the cathedral are the roof bosses, which vividly depict biblical scenes. Edith Cavell’s simple grave lies within the cathedral precinct. The Norwich Cathedral Cloisters
Many of the roof bosses mentioned above are situated in these cloisters. Along the walls are many fine murals and heraldic memorials. 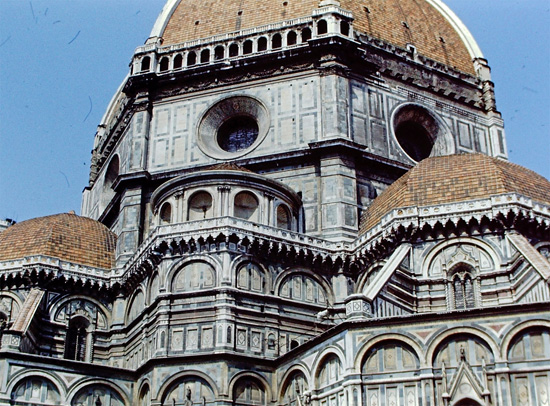 Florence Cathedral (detail), Italy
This building, completed in the 15th C. CE, is a key work arising from the Italian renaissance, which claimed to be reviving the classical values and style. The immense dome constructed by Brunelleschi consists of an inner and an outer shell. It is possible to reach the look-out point at the summit by wending a way between the two layers, an awesome experience.

For 33 years, Pat Seman has lived in a street that ends at the Amstel River. Every morning she walks along the river and sometimes takes photos with her Samsung smartphone, an SM-G930F. Since Covid, the river path has become much busier with people of all ages exercising, walking, and jogging. As a result, the grass verges have been worn away, as well as the usual spring flowers. River cafes have also been closed; their terraces empty. Seman took the photos of the social distancing poster and electronic message board in March 2020. Her photo of the ice-covered Amstel is from February 2021, contrasted with one a month later, at the beginning of spring. 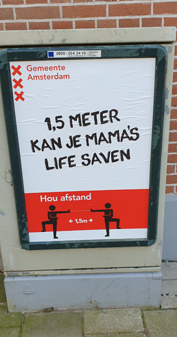 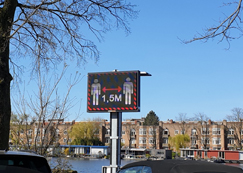 Walking brings a meditative escape to what is my busy work life in Children’s Social Care. Photography allows me to appreciate and live in that meditative moment. Tour de Lockdown was photographed on what a year ago would have been a bridge bustling with commuters, tourists, and vehicles. Though it is an eerie scene now, more so with the lighting and mist, it expressed the positive with life cycling into another year as it were. I admit I do enjoy photographing the beauty of bleakness. During my English Lake District holidays, I have had the opportunity to visit literary and historical sites, and my friend, the writer Neil Hughes. The District’s suddenly changeable weather, from bright and sunny one moment to cloudy and stormy the next, has always amazed me and sometimes caught me off guard.
As a result of this picturesque landscape and its chimeric weather, I always keep a camera at the ready. Below are photos taken with a Canon SK 130 IS in natural light. The first is of clouds descending on a landscape with Two Wanderers Along Coniston Water. The second is of clouds, landscape, and a bit of Lake Windermere taken from a window Reflection, Wordsworth House, Rydal Mount. 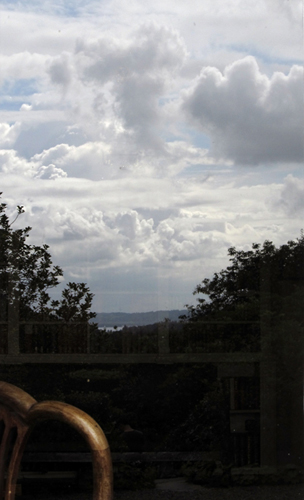 Photography is an extension of Lia Di Stefano’s aesthetic sensibility, which includes both writing and the visual arts. She often photographs dramatic light and weather conditions.
Tumultuous Sky was shot with a 35mm Canon SureShot camera in two parts: the top two-thirds and the bottom one-third, which were joined in Photoshop. The clouds appeared this colour, roiled violently, no wind on the ground, but a small tornado was later reported nearby.
Green Light, Wipers Off was shot on an iPhone XR as part or an ongoing series of rain photos and videos. The series is also part of a broader series of abstract photos. 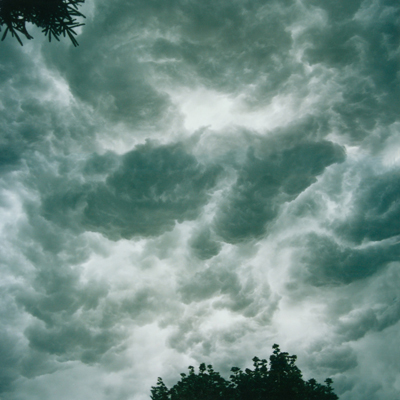 Dianne Kellogg is an Ohio native who has spent the last fifty years in northern Ohio’s rural snowbelt. Arctic blasts and strong winds off of Lake Erie can dump half a metre or more of snow overnight, collapsing roofs, knocking down trees, and making roads impassible for days. The end of winter brings maple syrup tapping time and the first blossoms, daffodils, a symbol of Kellogg’s Welsh heritage.
Kellogg has a BA from Hiram College. She studied watercolour under Florian Lawton and she has worked as a muralist and interior decorator. Having retired from governmental fund accounting, she now has time to pursue photography, poetry, and watercolours. 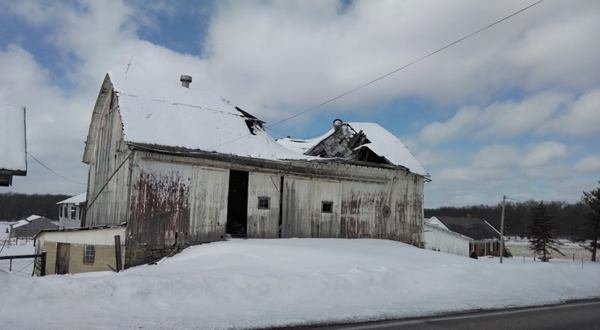 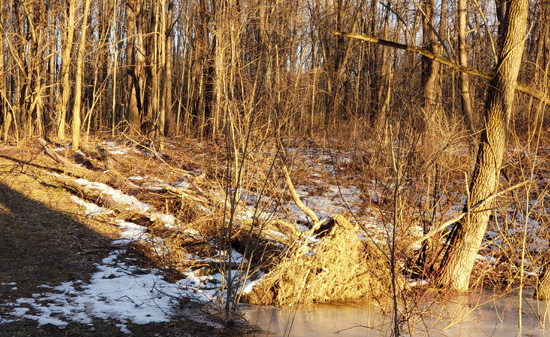 Keith Moul likes to drive around and stop at anything interesting. If there is space at the side of the road, he’ll stop (and sometimes on an isolated road in its middle). He processes the shot in Photoshop, without ever changing the content, but only to sharpen, contrast and provide maximum saturation (to his eye) depending on the subject. Landscape with Arizona and US Flags, Keith Moul, photograph, 2018 Bryan R. Monte always tries to take a camera with him when he goes into Amsterdam. Over the last decade, he has amassed a collection of over 1,000 photographs of the city, and especially its art and culture, including artwork in some of its museums’ permanent and special collections. The photo below of the north and west sides of the Rijksmuseum clock tower was taken in June 2013 with a hand-held, Canon Powershot SX130 IS with a focal length of 25,715, F stop 5 and an 1/160 exposure.