If you are in Amsterdam on a rainy afternoon and the lines at the Van Gogh Museum and the Rijksmuseum both wind down the street, may I suggest a visit to the Amsterdam Stedelijk Museum’s, Zero— Let Us Explore The Stars special exhibition. Even though I thought I was fairly well versed in “Modern” art, I was surprised last July to attend the press opening for a retrospective of an art movement about which I had no previous knowledge. 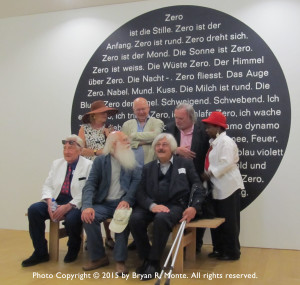 Just as with any new movement when people are experimenting with materials, some were more successful than others. Henk Peter’s Aquarel (1966, 2014 reconstruction), a wall of water-filled, triangular-shaped plastic bags filled and hung against a black background and illuminated by spotlights was for me the simplest yet most memorable work in the exhibition. The 20 rows of perfectly aligned bags of water catch the light in such a way that they actually shine against the black wall. Followed closely thereafter would be Yoyao Kusama’s One Thousand Boat Show (1963) a boat made of what looks like white stones, with hundreds of identical smaller images of the same boat projected around it, which seems to float in the room. And a third work would be Jan Schoonhoven’s R 62-16 (1962) mentioned above which, once painted white and mounted, shows the simplicity and the restful rhythm of its repeated structure.

Less successful in my opinion, however, are Amando’s tires mounted on a wall, Guenther Uecker’s chairs or TV sets with nails pounded in their sides or Jan Henderiske’s beer crate or cork sculptures, which although most students are accustomed to stacking crates in their rooms to make cheap shelving, I wouldn’t particularly call that art. In the same vein, herman de vries’ white, seemingly architectural, model building blocks don’t move me as much as Otto Pien’s perforated metal drum with its rotating internal light source that casts changing, expanding and deflating geometric images on the surrounding walls. Similarly the optical illusions that would come later in the sixties are preceded by works such as François Morellet’s, Sphère-trames, stainless-steel sculpture (1962) or the more dynamic optical illusions (albeit monochromatic ones) created by Günther Uecker’s, Heinz Mack’s and Otto Peine’s Lightroom gallery: Homage to Fontana (1964).

Some of Zero’s real treasures, however, are reserved for almost last. Two galleries to the left of the entrance hall (the last two if you follow the map provided by the museum) is a room of Zero videos. The best of these are the nude body painting performance art of Yves Klein with a live, seated audience and string quartet accompaniment in addition to Heinz Mack’s silver spaceman clothing, tall poles hung with round and banner-like silver reflecting material which seems set on another planet rather than on a North Sea beach. The former clearly seems to pre-date the later sexually-free counter-culture happenings that would take over campuses and the art world just a few years later.

Even if its sunny outside, I’d still recommend you take a break from the crowds on the Museumplein and use the opportunity to learn more about a relatively unknown (for me) 1950s and early ’60s European art movement which was the historical predecessor of the optically illusionary and happenings art of later ‘60s and early ‘70s. I guarantee your time at the Stedelijk will be well spent.