You are here: Home1 / Issues2 / bart plantenga – Happy Birthday Mother, Who Was Disappeared̷...

bart plantenga
Happy Birthday Mother, Who Was Disappeared by Forces Beyond Her Control

The decline of my mother, Christina, 93 on 14 May, had been a slow, long descent since I was a teen. But when does a life suddenly become less a tragic testimony to survival and more of a burden — you are not sitting around waiting or hoping your mother dies. But then again, there is the tick of a clock, and discussions arise about what dignity is, what the purpose of mere longevity is … how heavy is an urn filled with ashes anyway?

In my youngest youth, she was beautiful and loving. When I post a picture of her on Facebook, people usually react something like: “Wow, she’s beautiful.” What they mean is the photo, taken in 1949. I could feel her heart back then was full of noble intent.

Regarding dementia: I wonder, do you forget you forget and thus actually remember diving through a heavy fog with the high beams on and ultimately coming out on the other side without a dent or scratch?

As I turned 13 or so, seven years after we’d emigrated from Amsterdam to New Jersey, her inability to navigate her way through reality became more evident. Things, jokes, music began to bug her — or not reach her or were simply details of life that could not explain what she had experienced. Being from a generation when women in general did not feel it their place, her talent as an artist was never really pursued as expression, as therapy, as a way to make sense of the senseless things she had witnessed in Amsterdam during WWII. It just was not perceived as useful in any way.

Her loving was misplaced, replaced instead by a kind of obsession with the formalities of mothering, the rituals, the cleaning, the forbidding — the mechanics, the maintenance of order. This increased over time and even while me and my brother were growing up, neighbourhood kids would mock and tease my mom and call her “Crazy Tina”.

She wasn’t “crazy” (then), just very other, different, an awkwardness with English that was both charming and, among the neighbour kids, tagged here as weird. I never tried to analyse it until about 10 years ago, when I realized her life had probably been more adversely affected by WWII than we had ever thought. She was a teen in Amsterdam and had had her best years confiscated by circumstance, and any hopes she had for using her artistic inclination toward something more satisfying in life somehow became secondary to survival and recovery. [She did do the suburban thing — hobby painting in her down time as a mother, but they were mostly idyllic nature scenes with no faces on the leaves, no ghostly human-like figures in the background]. I don’t like to use any kind of excuse when it comes to behaviour, but there is a difference between excuse and cause and now after she’s told me so many of her WWII stories and now that I’ve processed them, I realize people were simply expected to bite their lips and go on with life after 1945. There was no civilian equivalent of shell shock, no PTSD.

This is from her journals I asked her to write down. She obediently obliged and, with the onset of dementia, she obliged again and again, rewriting them with slight variations a total of four times. I mean, when had I and ANYone ever really listened to ANYthing she had to say:

Hunger Winter: A terrible cold and nasty winter entire Europe 1943-44: Ice snow no food. No nothing. No heat. Everything was gone. People did go trough [sic] the garbage cans — you were really lucky to find one piece of food or some wood you could burn to warm your hands. I was the kind of person who was very fast cold so at night we left our socks on at least it did help.

My shoese got bad and no shoese in stores. The Krauts took all the shoese out the stores. I did not have a descend pair so going to work barefeet or on socks. It was really very strange to walk Overtoom on the stone sidewalk with no shoese on, cold and unpleasant. The socks where very quick gone on the stonen sidewalks.

Found a pair of sandals from cork material in garbage cans but they were quick gone but better than nothing and my dad did make soles under it and that is what I did wear to work better than nothing for quite some time. Also later on when winter came my ankles were open wounds and hurted. Mom put bandage on it but it was hopeless. Later on dad found old ice skating boots from mom on the attic and he made them to low shoese and put some extra stuf on the soles. They where nice and did holds up quite a long time. 2 years!

Hans Puts’ father did give us bread again. Also we tryed now fryed sugar beets and small tulip bulbs — the aftertaste was terrible but realy filling food. At night in bed you did hear your stomach ronking from hunger. next morning we had cabage soup. It was warm and tasted good. we did get 2 potatos for family also 2 at work. We cooked them up with straw heating and tasted good at work. It was heaven. 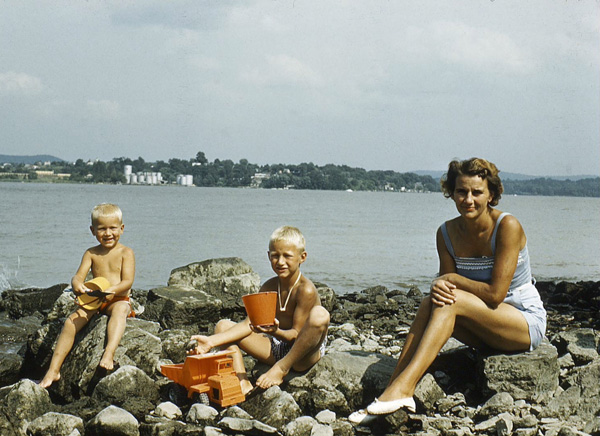 She became a housewife in 1953, a mother in 1954 and was displaced to a foreign land — the US — where she was never to feel totally at home again. Her inability to deal with these changes went unnoticed — and they were many and probably often more despairing and desperate than parents let on to their kids — as we became not unlike a migrant family, albeit my father was a white collar worker, a metallurgical engineer, a migrant who wore a tie.

She managed to explain it when she was maybe 80-something as: ‘I was a city girl who lived in the suburbs. There was no one to talk to; you never saw neighbours. They ignored you.’ Something like that.

We moved a LOT, so everywhere we landed we had to start over, to prove we weren’t weird as immigrants. Even though my mother had a wicked [embarrassing] accent and a different approach to mothering than my friends’ moms, I stupidly longed for the approach of the other moms, who were seldom around, who let you fix whatever you wanted for dinner.

Her unhingedness or her engagement, her passion with forethought could be quite entertaining, gonzo, uninhibited, unlike other moms. She tried decorum, but it was not her thing. We even joined a church to see if this would help us fit in. I saw no purpose to Bible lessons and my father hated wasting Sunday mornings sitting in a pew. Decorum was just not her thing; she spoke her mind regardless of what that might do for my or her reputation.

All that, plus what I learned from my mother’s [war] stories about privation, angst, traumatic stress, seeing her Jewish friends disappear forever, never knowing for certain, seeing people killed, executed, bombs going off, having almost nothing to eat, probably had a profound effect on her brain.

The last time she came to visit she was curious and we walked into the Legmeerplein, the square where she’d grown up in, and we sat on a bench and suddenly she told the most vivid, cinematic stories about gangs of pro-ally v pro-NSB [the Nazi-supporters], how some NSBers betrayed neighbours to the Nazis for a few guilders or extra food coupons, how one night the Nazis bombed a sand barge on the Schinkel and the house and square were covered in sand. How suddenly someone would no longer be around and you didn’t really talk about it….

She is now suffering advanced dementia and that is mostly bad. Although, I wonder if she also forget all of those haunting WWII memories and so, ironically, is finally left at peace. I sense not, however, since I gather the formative years are forever etched into the walls of one’s brain like graffiti scratched onto a bathroom wall, while short-term memories are nothing more than a dandelion’s fluffy plumes whisked away by a brisk wind. That was confirmed by her caretaker in her current nursing facility in Upstate NY, where I would sometimes bring or send her articles about Resistance heroes or pictures of Amsterdam during and after the war… The caretaker begged me kindly to not send her any more memories of those times because she was driving everyone in the house crazy with non-stop memories and insisting others had no idea what the war was like for people like her…. AQ